Deal-by-deal-investing: an introduction for investors

The deal-by-deal model of investing can be attractive for both investment managers and investors, as an alternative to a traditional investment fund. Jersey, a popular domicile choice for fund vehicles, has seen an increasing number of investment vehicles established in the Island as part of such a strategy.

The concept is simple. The investment manager identifies a single investment opportunity, raises capital from investors to finance the investment and then establishes a dedicated investment vehicle (an SPV) to acquire, hold, and then exit the investment. Investors receive shares or interests in the SPV in return for their money, which cannot be used by the SPV for any other purpose.

The advantages of a deal-by-deal model for an investment manager include:

But what are the advantages for an investor? Why should they consider investing in a single-asset investment vehicle?

These advantages can be very appealing, but there are disadvantages too that investors should be aware of.

In the private client space, investment in deal-by-deal investments may suit high net worth individuals with an investment background, professional trustees and family offices. Investment terms tend to be negotiated for each deal, so it's best to seek legal advice at an early stage.

Investment managers that use the deal-by-deal model include the likes of Duke Street, AAC Nordic, Charterhouse Equity Partners, Sterling Partners and Alicorn (Arowana's venture capital group). There are many more.

Similar to traditional investment funds, it is very common for single-deal SPVs to be established in leading international finance centres, such as Jersey, and Bedell Cristin advises investment managers and investors alike in relation to establishing or investing in such vehicles. 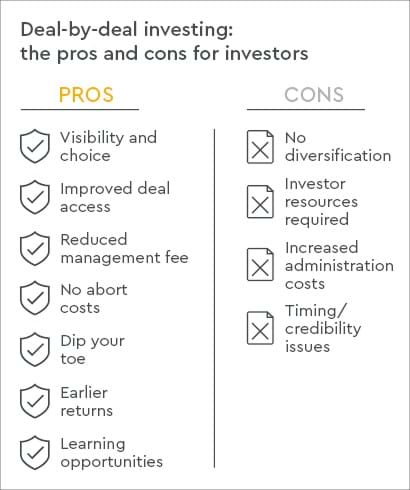 This article first appeared in the eprivateclient Jersey Report 2021: Looking ahead to a post pandemic world, April 2021.