This Briefing explains the current situation in and future plans of Jersey regarding the various United Nations ("UN") human rights treaties. Please do not hesitate to contact us if you need further explanation or guidance.

The birth of the UN
Historically, the UN officially came into existence on 24 October 1945. This was in the aftermath of the Second World War, which had claimed the lives of around 3% of the world’s population. The UN was born out of a desire for peace. It has always aimed to help nations work together to improve the lives of those in need and to encourage respect for each other’s rights and freedoms.

The UN human rights treaties
In December 1948 the UN General Assembly adopted the Universal Declaration of Human Rights ("UDHR") as a common standard of achievements for all peoples and all nations.1 The General Assembly has subsequently adopted resolutions instituting, and inviting States to ratify, various human rights treaties. Such treaties are legally binding once ratified.

There are nine core UN human rights treaties. Each has established a committee of experts - treaty body - to monitor the implementation of the treaty provisions by States. Some of the treaties also have Optional Protocols, which are treaties in their own right, dealing with specific concerns. They are open to ratification by countries who are party to the main treaty. Two of the core treaties, the International Covenant on Civil and Political Rights (and its first two Optional Protocols) and the International Covenant on Economic, Social and Cultural Rights, along with the UDHR, constitute the International Bill of Human Rights.

Jersey and the UN human rights treaties
Jersey, as a Crown Dependency, is not recognised as a UN State in its own right but as a territory for which the United Kingdom is responsible. Jersey cannot sign up to international agreements under its own authority (with a few exceptions, not including UN treaties) but can instead have the UK’s ratification of international treaties extended to it. This may occur at the same time as the UK's ratification or at a later date.

Jersey has had the UK's ratification of five of the nine core international human rights treaties and three Optional Protocols extended to it, as follows: 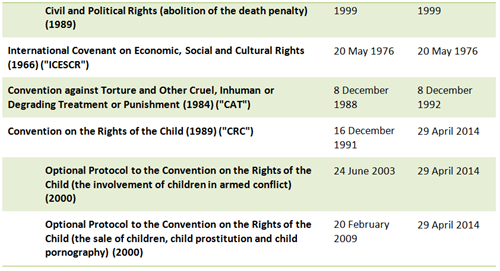 Jersey has not had the UK's ratification of the following core treaties extended to it:2

Jersey and the non-extended treaties
Out of the four core treaties that Jersey has not had extended to it, two have not been ratified by the UK and so are not available to Jersey.

There is no obvious reason why Jersey has not yet had the CEDAW extended to it, especially since the UK ratified it in 1986. However, Jersey has expressed its support for CEDAW. Jersey has stated that work is underway to identify where Jersey already complies with the requirements of the CEDAW and what legislative changes might be needed to ensure that the Island is compliant.3

The CRPD is the youngest of the core treaties and Jersey is, in character, catching up with the UK. The Discrimination (Disability) (Jersey) Regulations 2018 came into force on 1 September 2018. These Regulations do not by themselves meet the requirements of the CRPD, as they are exclusively about non-discrimination; whereas the CRPD requires positive action to ensure and promote the de facto equality of disabled persons. Jersey recognised this in the report accompanying the Draft Regulations and has said that, once the disability strategy and disability discrimination legislation are in place, the Council of Ministers may seek to extend ratification of the convention to Jersey.

Conclusion
Jersey is a small and relatively wealthy Bailiwick. It generally doesn’t suffer any of the major human rights crises that have been occurring globally, regionally or nationally. However, this does not mean that Jersey should not be, where it can, actively adopting and implementing these treaties, nor does it mean that Jersey does not have issues of its own.

Since it applies to half of Jersey's population, there is no doubt that Jersey’s failure to have the CEDAW extended is its most pressing human rights issue and one for which much more needs to be done. Furthermore, as Jersey has not accepted the competence of any treaty body to receive individual complaints of human rights abuses, a tool which gives concrete meaning to the treaty rights, it may be viewed as reluctant to comply fully with those UN treaties.

Jersey is just one of the many dependencies for which the UK is responsible, and so it represents one small section within the huge periodical reports which must be produced by the UK for review by the treaty bodies. While other governments were being praised, criticised and given recommendations, it seems the various UN Committees have only recently understood the significance of and situation in Jersey as a Crown Dependency.

Nevertheless, Jersey has been generally cooperative with the treaty bodies. It has actively implemented policies and legislation to give effect to the treaties that have been extended to it and in response to recommendations made to it. Most recently, for example, Jersey's Ministers have instructed officers to undertake a review of the corporal punishment of children by parents, relatives and close guardians in Jersey in consultation with the Children’s Commissioner.4 Furthermore, Jersey has expressed its intention to ratify the remaining two treaties available to it. Although Jersey may have had a somewhat sluggish start, it is now well established in its own right throughout the treaty bodies. The future promises less exploratory examination and more substantial and precise engagement.

[1] Although, strictly speaking, the UDHR is not a legally binding document, the rights contained within have been given effect throughout various UN treaties. Some argue that it has since become international customary law. Furthermore, the UDHR defines the meaning of "fundamental freedoms" and "human rights" as referred to in the UN Charter.

[3] This was in response to a question on Jersey's position on CEDAW put to the Minister for External Relations by a Deputy and tabled at the State's Assembly on 19th March 2018.

[4] In a Royal Court case a man was sentenced to nine-month probation order, and 120 hours community service for hitting his very young son on two occasions, once with a belt and once with a wooden spoon. Although it was due to the gravity of the beatings that the man was convicted (or even charged), the judge stated that "children should feel safe in their homes". This may suggest the Court's disapproval of the corporal punishment of children.